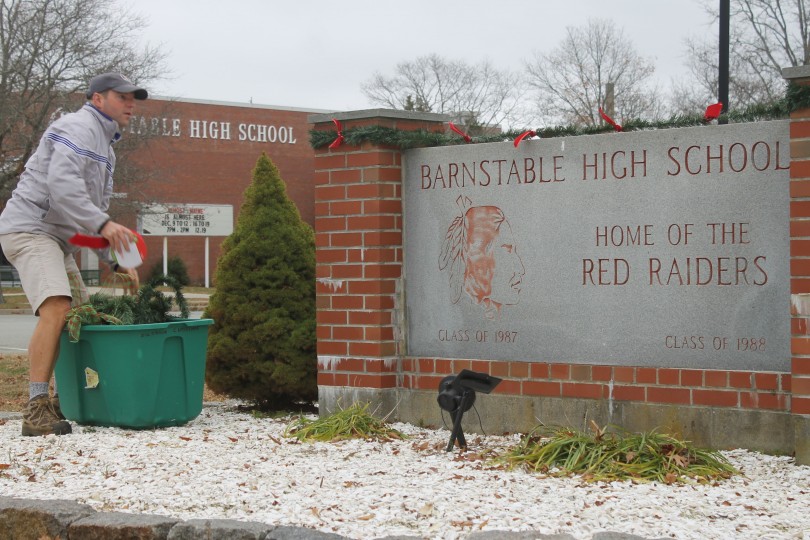 BARNSTABLE – The principle at Barnstable High School is that details matter.

On Saturday in late November, shortly after noon, Principal Patrick Clark attended to details – the kind of tiny details that no one notices and everyone notices. He was putting red ribbon holiday decorations on the main sign outside of the school on West Barnstable Road.

“Every season, we try to dress the place up nice,” he said. “Just to show the property is cared for.” 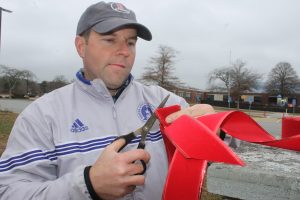 Barnstable High School Principal Patrick Clark cuts some ribbon for the main sign outside the school. “It’s more than just decorations,” he said.

Clark, standing next to a sign put up by the class of 1987, is a graduate of the class of 1990. For four years he was Principal of Wareham High School, and then six years ago he became principal of his alma mater.

Now he leads 1,900 teenagers and 220 adults in various capacities, he said. As an administrator, he administrates.

But on Saturday afternoon in the fresh air all alone with red ribbon and scissors, Clark explained, “I think that you lead from the front. I enjoy doing outdoors work. This is a little something extra I can do.”

And he said that the message that holiday decorations gives to students, faculty and the community is that the school cares about all details, including the overall atmosphere of the school.

“It’s more than just decorations,” he said. Inside the school there are several charitable drives for donations run each year, said Clark. “Last winter we ran 14 different programs of that nature,” he said.

“The messages we send by things like that are just as important as what happens in the classroom,” said Clark. “We take pride in the school.”