WOODS HOLE – After the R/V Neil Armstrong arrived in its new home of Woods Hole, more than one speaker noted that Earth was famously coined “the blue marble” by astronauts looking in wonder at the planet from far away in space. Obviously blue, because of the oceans.

This arrival of a new research vessel in Woods Hole was more than the celebration of a ship. It was a celebration of exploration. United States Congressman William Keating (D-Bourne) called the new ship “an achievement that will be measured more in generational terms than years or even decades.”

Astronaut Sunita Williams, who has family in Falmouth, noted that all of the space shuttles were named after ships, so it is only fitting that the newest research vessel is named after a space explorer.

The new, Navy-funded $100 million, 238-foot research vessel, which can carry 24 scientists and 20 crew, arrived for the first time to its home at the Woods Hole Oceanographic Institution on Wednesday morning to great ceremony. A band played, there was a helicopter and Coast Guard escort for the ship. Dignitaries, including Armstrong’s widow, Carol Armstrong were there. Escorts for the R/V Neil Armstrong Pulling in to Woods Hole 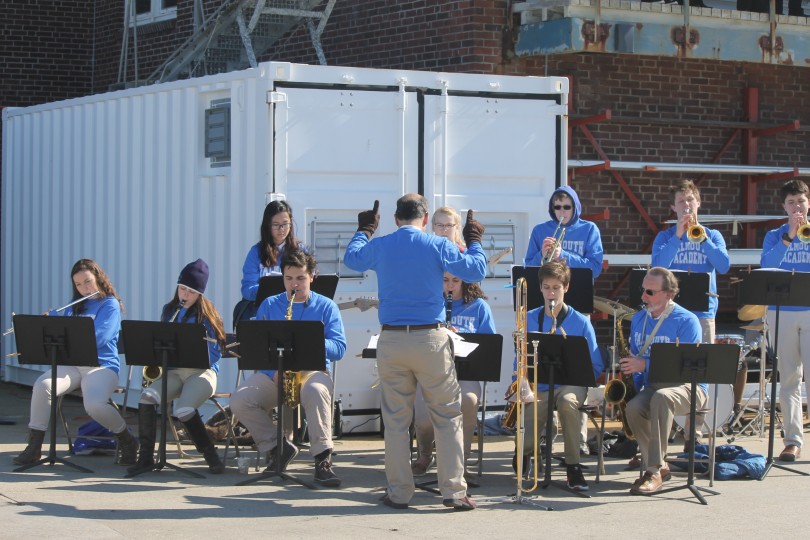 A lot of equipment Kent Sheasley, Captain of the R/V Neil Armstrong, in front of a high-tech buoy A cabin in the R/V Neil Armstrong A navigation screen on the R/V Neil Armstrong The R/V Neil Armstrong is only the ninth research vessel built for the US Academic fleet since 1969, when its namesake became the first person to walk on the moon. Two of those ships have since been retired. Kent Sheasley, Captain of the R/V Neil Armstrong, in front of a high-tech buoy

The ship was funded by the Navy and is leased to WHOI for free, said Dr. Frank Herr, head of the Office of Naval Research’s Ocean Battleship Sensing Department, who was in Woods Hole for Wednesday’s ceremony. People ask what does the Navy get back, he said. “The answer is we get back research.”

David Scully, Chairman of the Board of Trustees of WHOI, noted that WHOI’s first research vessel, the Atlantis, was built for $230,000 with annual operating costs of $38,000, “or about a day rate on the Armstrong today.”

“Jacques Cousteau used to say you have to get wet to understand the ocean,” said Scully. “WHOI says you have to go to sea.”

And explore the blue marble. “Only three percent of the ocean has been explored,” said Scully.

More will now be explored with the R/V Neil Armstrong. That’s truly one giant leap for mankind.