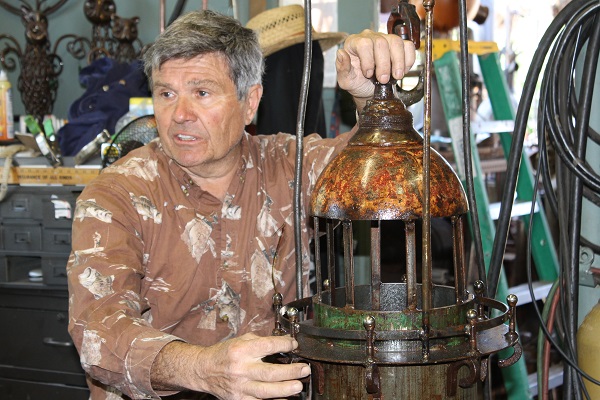 Michael Kacergis with a metal lighthouse he made at his welding shop in Provincetown.

PROVINCETOWN – A customer entered the Provincetown Welding Works on a recent summer day wanting to buy a lighthouse.

He bypassed the metal fish, flowers, and birds, the sculptures of animals and people crafted of found metal objects and tools, and the mermaids and weathervanes in the yard.

He walked through the gate made of old boat propellers to enter the workshop where Michael Kacergis, 69, was explaining his craft to a passerby.

“What it is, is heat and hammering,” Kacergis said, pointing to the copper and lead hammers used to pound the metal and explaining how heating the metal differently produces different colors.

He looked at the customer. “People always have a pleasant smile when they come into the shop,” Kacergis said. A detail of a lighthouse at Provincetown Welding Works.

“Of course, you have to smile,” the customer said, looking around at the whimsical metal sculptures stacked up and hanging from hooks, shelves and even the ceiling.

He said to Kacergis, “You must love what you do.”

Kacergis answered, “I certainly do.”

He looked around the shop and added, “I’m fortunate.”

The customer knew what he wanted. He wanted a lighthouse, just like one he saw on someone’s lawn in Provincetown.

Kacergis showed him the two he had in stock—about five and a half feet tall and about 150 pounds.

The price of one of them, $2,100 included the former airport runway light Kacergis repurposed when they redid the town airport. Knock $200 off the price without the light.

The customer said he never thought about the lighthouse sculpture having an actual light installed inside of it. 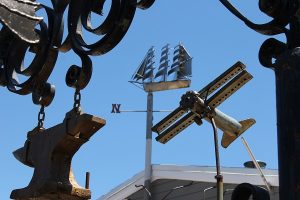 Kacergis explained how an electrician could install a light and how the power would need to be grounded for the outdoor sculpture.

He suggested the light should also sit on a mound, befitting a lighthouse.

The guy admits he never thought of those details. He just wanted a lighthouse.

“I’m trying to talk you out of it,” Kacergis said with a smile.

There are three lighthouses in Provincetown: Long Point Light, occupying the sandy spit at the tip of the Cape Cod peninsula; Wood End Light, a square squat light, also on Long Point; and Race Point Light, near the Cape’s easternmost beach.

Kacergis explained that he modeled his lighthouses after Race Point Light. He built them after his sister, Kathy, spent a weekend at the light.

Trying to reproduce Race Point Light in metal “became the priority about 14 or 15 years ago,” he said. Provincetown Welding Works is one of the town’s most unusual shops.

The customer, getting his first close look at the lighthouse, admired its detail. He did not realize all that had gone into the lighthouse, the massive undertaking such a sculpture is.

But for Kacergis, the details in his works, the scars on the whales, the fins on the fish, are a critical part of artistry.

With a focus on fish, birds, lighthouses: the environment of Provincetown has long been a theme in Kacergis’s work.

“I’m always inspired by the seashore,” he said.

Those inspirations are apparent a half block away from the shop when shapes of mermaids, birds and fish cut out of shiny metal slice through the blue sky.

Inside the shop are large metal barrels containing of all manner of things, pieces of this and that—what Kacergis calls his “treasure bins.”

The shop was begun by Michael’s father, Clarence C. Kacergis, in 1946 as a metal fabricating shop to perform boat repair to Provincetown’s fishing fleet. Michael Kacergis looks at a photo of his father, Clarence, who started the shop in the 1940s.

Clarence, Michael Kacergis recalled, had large powerful hands, the better to bend and shape metal. Among his hobbies were weightlifting and boxing.

“Growing up in the 1930s, this was part of the culture,” Michael said.

Clarence Kacergis was from Shenandoah, a coal mining town in Pennsylvania.  During high school, he worked as a blacksmith’s apprentice.

“My father said, ‘you can learn something from anyone,” Michael said.

During World War II, Clarence was in the Navy serving as a machinist mate.

Because of his welding skills, he ended up getting an exemption from service and worked in a military aircraft machine shop in California where he met Matilda “Tillie” Jackett, a Provincetown girl visiting relatives in California. Copper and lead hammers are tools of the trade.

They got married, but she became homesick for Provincetown. In 1946 they moved back east.

When Clarence opened his welding shop, the lot on the corner of Nickerson Street was the westernmost property on Bradford Street, Michael Kacergis said.

He pulled out an old photo showing the building back then. It looks much the same.
Kacergis recalled summer days when he was a boy and the kids got ice from the ice man and hid under Union Wharf eating the cold treats.

The Kacergis family lived in a 19th century Greek Revival home across the street from the shop.

The house is still there and is now Michael’s home. But instead of utilitarian boat repairs, Michael Kacergis focuses on welding as artistry, something his father dabbled in as well. A display of fish made by Mike Kacergis.

Perhaps the most visible example is a metal model of a schooner that decorates a post outside the Kacergis home.

The much-admired, elaborately crafted schooner is an example of the artistic skill of Clarence Kacergis.

Make Something or Repair Something

Whether repairing a boat or crafting a model schooner out of metal, the senior Kacergis wanted to be busy.

One of his father’s oft-used phrases, Michael Kacergis recalled, was that every day, he wanted to either make something or repair something or the day was wasted. Two people made out of found objects, “greeters,” are lined up at the door of the shop.

“I was blessed he would spend a good part of his time with me. He was an engineer without a degree,” Michael said.

Clarence Kacergis bemoaned the disposable society that defines America these days, as does Michael.

Michael grew up learning welding from his father. He worked as a science teacher at schools in the region, including Cape Cod Regional Technical High School in Harwich.

He would bring his portable forge to school and set it up outside to teach the students welding, he said.

“In the cold part of the winter, the students didn’t want to be outside,” Kacergis said. “I wanted to prepare them for working. A lot of work welders do is outside.” A mermaid is among the whimsical sculptures at the shop.

He said, “I would teach them how to be in the shop safely, how to handle the equipment properly. If I was doing jobs, they would help me. I allowed them to have ideas of their own, to be creative.”

But with his teaching days behind him, these days, Kacergis works at crafting all manner of items out of metal, the oil and grease from the equipment turning his hands and arms dark.

“Some days I go home, I might look like a coal miner. But it washes off,” he said.

He likes to be creative, continually trying something new.

“You take pride in different projects, in not doing the same things over and over,” he said.

When customers come in, he enjoys discussing his craft. An elaborate ship made by Clarence Kacergis decorates a lamp post at the family home across the street from the shop.

This particular customer came in for a lighthouse and left with a deeper knowledge of the artistry that goes into each piece that Kacergis makes.

After discussing the lighthouse with Kacergis, the customer said he would go home to think about which one he wanted, the one with the light or the one without the light.

He said he had also long admired the schooner across the street on the Kacergis house, the one Clarence Kacergis made years ago.

Michael Kacergis said the schooner was not for sale.