NORTH FALMOUTH – The four parking lot attendants at the visitor’s lot at Old Silver Beach appeared to have superpowers Saturday morning – parking cars faster than most people can get angry.

“We’re like a family. The four of us call each other the Dream Team,” said Molly O’Brien, 20,  who  lives in Falmouth and attends the University of Vermont, studying nursing. ”I definitely look forward to coming to work in the morning,” she said. This is O’Brien’s fifth summer working for the Falmouth Beaches. Maguire Bowie and Mandy Crowley helping people have a day at the beach.

They are the fantastic four, running the organized chaos that is Falmouth’s busiest and most profitable beach parking lot with an interchangeable precision that is sort of remarkable to watch. (SEE SLIDE SHOW BELOW) In the first 15 minutes, it seemed they collected $20 a car every seven seconds or so until it slowed down. And then it got even busier.

“This is the most popular beach,” said Maguire Bowie, 19, a summer resident from Philadelphia staying with his grandparents in North Falmouth. This is his second year. He is a student at Providence College studying economics and finance. With the beach collecting up to $12,000 a day on weekends, he is getting a good education in economics and finance in the summer too.

Mandy Crowley, 21, of Andover, summers in Falmouth and goes to school at the University of New Hampshire as an English major going for an accelerated master’s in early education. This is her sixth year working at Falmouth beaches. Since she wants to teach young children, working this parking lot looks like perfect training for her as well.

The fourth member of the Old Silver Dream Team is Mark Martinho, 19, of East Falmouth, a student at Flagler College in sports management. Martinho is assistant superintendent of beaches in Falmouth. This is his fourth year working for the beaches. “I love it,” he said. “I’m a people person. And I am so thankful to have grown up in this town. I love sharing it with others and it’s a great feeling to see people come here ready to relax.”

Of course, ready to relax and actually relaxing can be two very different things, especially in a line of cars trying to park at the beach.

“You’d be surprised at how unhappy people are in the morning coming to the beach,” said Crowley.

All four laugh about it because they know that the stressed-out people are only a small percentage of their beach crowd. In fact, they have it down to an exact percentage. Ninety-five percent of the people that come here are great,” said Bowie. “It’s just that 5 percent.”

“We will get our fair share of lip,” said Martinho. “That’s the 5 percent.” Both Martinho and Bowie said they had been cursed at in several different languages.

“A lot of people speak at you in foreign languages and you just assume they are cursing,” said Bowie.

And Martinho said, “English stings the most because you know what they are saying.”

Crowley said the job entails “learning how to deal with someone who is not in the best mood. We have to be understanding and professional.”

Of course, 95 percent of the people coming to the beach act like, well, they about to spend the day at the beach. “People who come in here are literally the greatest people,” said Crowley. Some even give them drinks or snacks as a thank you.

A Day In the Lot

Their shift is from 7:30 AM to 3:30 PM. The first hour and a half is spent cleaning the bathrooms and parking lot from the day before, and organizing for the upcoming day. They have to have signs, tickets, a cash box – and, of course, someone has to go for coffee. 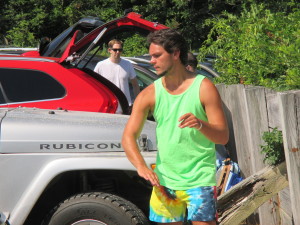 Mark Martinho directs someone to turn the wheel.

The gates open at 9 AM. All the while, cars line up outside the locked gates. “They should open earlier,” said Cheryl Williams of Braintree, who was first in line. She said she had been coming to Old Silver Beach for decades. “My parents took me here since I was 5 years old,” she said. She was at the beach this day for a family reunion.

While Williams wished the beach opened earlier, she was proud of being first in line. She arrived, she said, at 7:20 AM. “I always wanted to be first in line,” she said.

Old Silver Beach actually has four parking lots. The resident’s side is, as the same suggests, for residents only, which means only cars with Falmouth Beach stickers are allowed. One attendant is on that side checking for stickers.

But the visitors lot is where the action is. It’s an overflow for residents, who can park free. And it’s a pay lot for visitors to the town. That lot is, by the way it is organized, actually three lots. There is the main lot, which fills up first.

After the chute fills up, cars are then parked in an overflow lot across the street. It is not paved.

For the attendants, all of this is no day at the beach. Well, actually it is.

Working At The Beach

“I love it so much,” said Crowley. “It’s like our own little family over here. If you work with someone for eight hours a day, you know them better than anyone.” She said she even comes to the lot on her days off. Even when she’s not being paid, she said, she still pitches in. Without her staff shirt, she said, “People probably think I’m kind of a crazy person who is super friendly.” Where they are all going.

In fact, she is someone who loves her job and her co-workers. Business schools could take note how this mutual admiration society of four young adults runs one of the most profitable beaches in Falmouth.

While their may not be a movie made of this fantastic four, some of the stories they tell sure would fit into a great comedy.

“We definitely have a good idea of how to deal with people,” said Bowie. “We get a pretty good cast of characters.” As an example, he said, “One person took a corner too hard and banged into the metal gate, which ripped a hole in their door. You could see into the car. They just looked at it, parked the car, and went to beach.”

“Our boss jokes that we don’t have a job description,” said O’Brien. “One day last summer, a woman came up to us and said, ‘I forgot that my pet goldfish is in my car. Will you pet sit my goldfish while I go to the beach?’ So we sat with a goldfish bowl in the booth all day. That’s my PG story.”

O’Brien said all the parking lot attendants at all the Falmouth beaches are great. “It’s definitely not just the four of us,” she said. “There are 30 something other people, and they’re all awesome too.”

O’Brien summed up what made the beach lot work so well. “At a couple inches off the ground, we’re all at the same level,” she said. “We all pick up trash. We all clean the bathrooms. And we all bond over the five percent.”