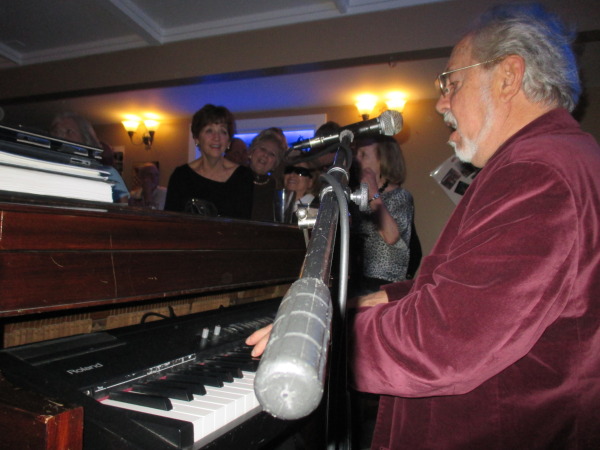 FALMOUTH – The space/time/piano continuum is not an abstract theory, but rather a proven mathematical model on display Sunday night in Falmouth, where the music and crowd from a popular closed restaurant shifted seamlessly to a new restaurant.

“People were coming up to me all night long, just saying thank you,” said Jack Sorgi, the owner, along with his wife Suzanne, of Jacks Restaurant & Bar, which hosted a reunion of musicians who used to play at the Nimrod Restaurant. With the urging of self-described “enthusiastic customer” Judy Risch, Sorgi brought in five well-known piano players as as other singers to Jacks for what turned out to be a standing-room only night of music, smiles, and memories.

“This is like a family reunion,” said John Salerno, a piano player who played for years at the Nimrod. “This is family, friends, people who had a common intersection of a fun time in their lives at a fun place in their life. It was a time in people’s lives when everything was good and fun and happy.”

And it happened again on Sunday night at a new location. And while the grand piano was only a prop for an electric keyboard placed strategically on top where the piano keys should be, the atmosphere around the piano was Nimrod legitimate.

“The Nimrod was a very comfortable place,” said Salerno. “We had people who liked to sit around the piano bar and just hear songs all night long. People came up who liked to sing.”

(See Can The Historic Nimrod Be Saved? The Rockets Red Glare – An Essay)

Donna Scheer, who sang at the Nimrod for more than a decade, said, “I knew a lot of people who were older and single and didn’t necessarily want to go out to find someone, but they wanted a place where they could feel safe, hear some music and chit-chat with friends.”

When asked what was the crowd at the Nimrod like, musician Joe Sutton said, “This is it. An older crowd, very enthusiastic and very into music – especially show tunes and standards. I’m looking around the room and I recognize at least 75 percent of the people.” On Sunday night, Sutton sang a few songs while Eddie Scheer played piano. Piano player Eddie Scheer said he always loved playing for the Nimrod crowd “because I know everybody’s song. This woman likes romantic music, someone else likes ‘Sweet Caroline,’ ” he said as an example of knowing what songs people like.

Those faces and those songs used to be at the Nimrod Restaurant, an old colonial building that was actually hit by a cannonball in the war of 1812. “I came down here seven years ago to take care of my mother,” said Risch. “I had just retired. I knew nobody. Somebody told me about the Nimrod. It was a place for me to hear music. And some of the music was better than what I would hear in Boston.”

After the Nimrod closed and Jacks opened, Risch discovered that Sorgi had been hiring some of the musicians that used to play at the Nimrod. And she approached Sorgi about having the reunion.

Piano player Steve Richardson looked around the room after he was finished playing and he said, “They’re coming back to their Nimrod roots. It was an institution.”

After Wally Durant had his turn on the piano on Sunday night, he told a reporter, “I’m Mr. Nimrod… I built the bar around the piano.”

Ah, the piano bar. It was an intimate setting replicated on Sunday at Jacks as folks sat around the piano requesting songs, singing along, and reliving memories while making new ones.

“So many people were sad when the Nimrod closed,” said Donna Scheer. “Some people came there for the first few years I was there. Others came at the end. It was spread out. But they’re all here tonight. Some of them I recognize very easily, and some have changed considerably and are harder to recognize.” Durant said, “Half of my friends are now dead.”

Eddie Scheer described the crowd at the Nimrod as “50 until death.”

It was the same crowd at Jacks on Sunday night – an older crowd that was not in a hurry to head right home after dinner. Sorgi said he is showcasing music in Jacks because “I didn’t want people to just eat and leave.”

On this night, they stayed. Asked to describe the night, Sutton said, I don’t know what it is, but I’ll tell you this. The people who are here are the last generation of people who like this kind of music.”

Eddie Scheer said, “Live music is in danger. Now with karaoke, it’s hard to find somebody who has a piano.”

Even though the piano was a prop, the piano music was real. “It’s an amazing turnout. Look at this. We made so many people happy tonight.” said Sorgi with a big smile, after he sang a couple of songs.

Also, check out all our Cape Cod music stories