FALMOUTH – Artist Jim Bowen is said to be a leader in the effort to bring the ancient art form of mosaics to Cape Cod, and now in his new book, “My Mosaic Alphabet Book,” he brings a colorful alphabet—a series of mosaics—to young readers.

“As far as I know he was the first to make and teach [mosaics] here,” said Cataumet artist Linda Dadak of Creative Glass design, who first worked with mosaics in a class with Bowen.

Bowen has been a mentor over the years to Dadak and others through classes and community art projects that feature mosaics. Those projects include a 20-foot long mosaic on a bridge underpass along the Shining Sea Bikeway in Falmouth, as well as mosaics at the Falmouth Dog Park, at Cape Cod Hospital in Hyannis, at Cape Cod Community College and even in the Outer Cape at Truro Center for the Arts at Castle Hill.

But his largest project is for his littlest fans: “My Mosaic Alphabet Book” is a rhyming children’s book done in mosaics.

Bowen’s original mosaics for the book, the 26 14-by-14-inch panels that make up the alphabet book, are currently on display at Highfield Hall and Gardens in Falmouth until October 31, 2016. 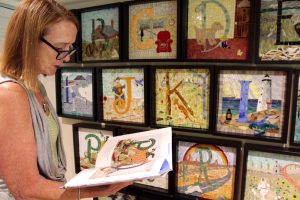 Debbie Bowen wrote the rhyming text in the book.

Bowen caught the mosaic bug almost 20 years ago after Debbie asked him to make a mosaic tabletop to sell in her gift shop in Falmouth. He immediately took to the medium and his studies took him all the way to Ravenna, Italy, which is famous for its Byzantine mosaics.

On Cape Cod, he has been spreading the love of mosaics through classes and workshops for almost 10 years.

He taught mosaics as an adjunct professor at Cape Cod Community College for a decade, where he started the mosaic program, which was, he said, one of only three or four college mosaic programs in the country. He also founded Cape Cod Mosaic Workshops to give classes on mosaics in Falmouth. In 2011, he co-curated, with Linda Dadak, the National Mosaic Exhibition at Highfield Hall.

The mosaic on the Shining Sea Bikeway is perhaps Bowen’s most visible piece. Dadak served as the lead artist on the project, which was based on a drawing by Falmouth artist Erica Szuplat. Jim Bowen shows a detail in one of the panels.

Dadak said, who after studying with Bowen now teaches mosaics herself and offers private instruction in the art, wrote, “Roughly some 16 years ago, Jim introduced me to mosaics with one of his great classes and my journey continues.”

Ferreira said, “Jim has continued to be a mentor to me as I frequently seek his advice as I have begun to work on more complex projects throughout the community and with commissioned pieces.”

Many in Falmouth know Bowen from his “day job” as a hair stylist in town for decades. He owned Headlines Hair Salon in Falmouth until 2000 and now works at Artisan Salon. The artist uses a glass cutting tool to cut the pieces of stained glass.

After he sold Headlines Salon, Bowen said he wanted to spend more time as an artist and was considering different media. He eventually settled on mosaics because it matched his sense of order and detail.

“There are thousands of oil painters. I wanted to do something different,” he said.

The alphabet book was a project that Bowen shared with his family, and not just his wife Debbie, who wrote the book’s text.

The book is dedicated to the Bowens’ six-year-old granddaughter Pilar, who helped with some the letters during visits to her grandparents. The book has been in the works throughout most of the young girl’s life.

Each 14-by-14-inch panel is made up of hundreds of pieces of glass placed carefully in place. Bowen said that each individual mosaic, representing a letter of the alphabet, took about 40 hours, making the entire project take about 1,000 hours over four years to complete. The tools of the trade include two-wheeled nipper to cut the glass.

The tools of the trade for a mosaic artist are, of course the stained glass pieces, as well as a tool to cut the glass, called two-wheeled glass nippers; and the grinder, to smooth out the shape or create a rounded corner. Bowen also uses a small kiln to fuse some of the glass pieces together.

Seeing the alphabet mosaic works in person—as opposed to in the book—makes clear their three-dimensionality, which Bowen derives from a layering process.

Jim Bowen pointed out some of the details on the original artworks, the glass newts on the “N” page, the intricate circular background on the “Y” page, and so many more. Each letter seems to have its own special challenge for the artist. Children can look for words that begin with the featured letter in every panel, including the unicycle and ukulele in the “U” panel.

The process for each artwork began with Bowen doing a thumbnail sketch for each letter, looking in the dictionary for ideas for words to include in the work. He would write out the words and, as he put it, he would “see what goes together.”

As for the text, Debbie Bowen said she was inspired by picture books she loved as a child. She said she has always been interested in writing and would often compose a rhyming poem for a family birthday or other occasion.

But although the Bowens worked separately on their portions of the book, they combined to create tributes in the book to their beloved grandchildren.

The “P” mosaic celebrates granddaughter Pilar in Deborah’s rhyme: “Pretty Princess Pilar prefers peas and pumpkins to peppers and pears in her stew, when she provides provisions for her palace in Peru.” The “X” panel pays tribute to the Bowens’ grandson Xander.

Their grandson Alexander is celebrated in the “X” drawing that includes his nickname, Xander: “X marks the spot where the pirate, Xander, exalts in the treasures he found. Exploring with his bird, the Xeme, excited to be homeward bound.”

The couple decided to self-publish the book after sending queries out to 20 agents and getting feedback that the book was “a tough sell.”

Both Bowens are entrepreneurs, Jim having owned the salon and Deborah having started the gift shop Bojangles Int’l, which was on Main Street in Falmouth for many years. Deciding to plunge into the world of self-publishing felt like risk the two were willing to take.

So far that risk has paid off with 900 books sold and counting, making it look like a children’s alphabet book may continue Jim Bowen’s quest to spread his love of mosaics to Cape Cod and beyond.