SOUTH YARMOUTH – At some fishing shows, people seem more interested in the beef jerky than the fishing lures. But not at the Annual Fisherman’s Yard Sale, which took place this past Saturday at the Riverway Lobster House in South Yarmouth. It’s an event that, as one attendee said, attracts “authentic fishermen.”

This was the eighth year of the yard sale, which Gary Brown started as a fundraiser for the Cape & Islands Veterans Outreach Center.

Brown, a lifelong Hyannis resident, served in the 82nd Airborne in Vietnam in 1969. He started the fundraiser for veterans because, he said, “I was surprised nothing was being done.” 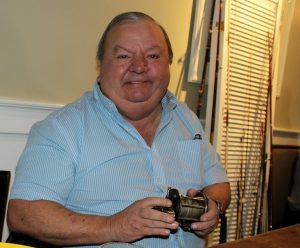 Captain Gary Brown organizes the Fisherman’s Yard Sale every year as a fundraiser for veterans.

A longtime charter fishing captain on his boat, the Bass Ackwards, Brown decided to get the fishing community involved in a sale to raise money to help veterans. The sale took place at the VFW for the first three years, then moved to the Moose Lodge in South Yarmouth.

This year’s event was the first time at the Riverway Lobster House, a location suggested by the restaurant’s owner Larry Siscoe, who Brown says he knows from fishing.

There were 26 booths at the event, according to Brown, from the Cape Cod Salties to the Kennedy Gallery & Studios, selling fishing and Cape-themed prints.

As to what you could find at the yard sale, Brown was succinct: “Nothing Alive.” Other than that, pretty much anything, as long as it is connected to fishing, of course.

One of the highlights at the sale, according to Brown’s daughter, Barbara Komenda, were the large display of colorful wooden lures handmade by Robert Davies, 73, of West Yarmouth.

Davies, who drove an oil truck for Canal Fuel for many years, had fished commercially out of Chatham on gillnetters and also owned his own tuna boat. When he retired from the oil company at age 65, it was in the spring and, as he said, “time to go fishing.”

He bought a $22 Gibbs lure and lost it while fishing that same day. He bought a second one and soon lost that one out in the waters too. Traps for sale outside the Riverway Lobster House during the annual fisherman’s yard sale.

The Gibbs lure is named after Stan Gibbs, the legendary Cape Cod Canal fisherman now memorialized with a bronze sculpture in Buzzards Bay. Davies remembers going fishing with Gibbs when Davies was just a boy of about 10 years of age. Gibbs took Davies fishing for bluefish off of Sampson’s Island on the Cape’s southside.

“Back then bluefish were rare; bass were everywhere,” Davies said. Gibbs’s fishing expertise impressed Davies and the memory has stayed with him for more than 60 years.

Frustrated by losing the expensive Gibbs lures, Davies had an idea. In his garage, he had a 100-year-old belt-driven lathe. He got to work, turning an old handle into a lure. “That lure caught a fish. It went from there,” he said.

In recent years, his business has taken off, Davies said, wearing a pullover with his company’s tagline: “Happy as a clam with a rod in my hands.”

His signature handmade lures are the “Slippery Squid,” which, he said, “flies into the wind and casts a long way,” and the new “Canal Cruiser,” which he made for people who want to cast out into the middle of the Cape Cod Canal. 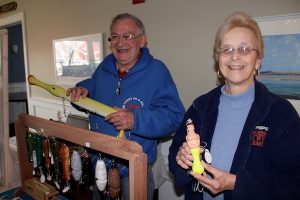 Bob Davies and his wife, Mary, show off some of Bob’s handmade lures.

“I built the lure for the canal. I wanted to outcast everyone,” he said. “I wanted to be the guy that builds the lure that hits the rocks on the other side [of the canal].”

He also tests his lures at West Dennis Beach, known as the first place fish show up early in the season.

One of Davies’s customers, Bruce Ryan, extolled the virtues of Davies’s lures. “Bob continually tests his products—the balance in the lures. He takes a couple of extra steps, painting, finishing, weighing and designing. He listens to hardcore fishermen to bring him suggestions.”

Scott Torrey, a commercial lobsterman out of Sandwich, brings his catch to the sale every year, but not the catch you think. He brings all the stuff that gets caught in his traps, other than lobsters. This year, that included eight anchors and about 100 lures. He gives them to people for free and asks for a donation for the Cape & Islands Veterans Outreach Center. Scott Torrey, left, a commercial lobsterman out of Sandwich, brings lures and other objects he brings up in his lobster traps to raise money for the veterans outreach center.

He also brought old license plates to the sale to raise money for the veterans cause. He found them in his grandfather’s Cape Cod garage. “We’ve collected some junk over the years we’ve been here. I’ve been here 58 years and my family for 100 years before that,” Torrey said.

A couple of hours into the sale Saturday morning, Torrey had just a few lures left and he ended the day with a $500 donation to the veterans cause.

When asked what was the most unusual thing he has brought up with his lobster traps, Torrey considers the question for a moment before remembering a big one: a lounge chair.

Mike Mullaney of First Line Fishing Travel out of Chatham, also came to the sale hoping to support veterans and to let people know about his business. Mullaney runs a fishing guide business that connects tourists with guides on trips out of ports from Yarmouth to Provincetown.

Mullaney said this time of year, the schoolie stripers start running off Martha’s Vineyard and off Popponessett. But the real striper fishing doesn’t start until a little later in the season. He pointed to buds on a tree out the window of the Riverway. “That’s the telltale sign,” he said. Michael Mullaney, right, of First Line Fishing out of Chatham, admires one of the Fishin Magician lures made by the company run by Steve Bachand, left, of Pocasset.

Nonetheless, Mullaney said, from April to mid-May, there is fishing action on the Cape’s numerous freshwater ponds, many stocked with pickerel, perch, rainbow trout, and brown trout.

But after about May 15, “everybody’s after schoolies,” he said. “June is keeper stripers.”

Steve Bachand, who runs Fishin Magician, a lure company out of Pocasset, also had a table at the yard sale, Mullaney said his personal favorite of Bachand’s lures are the sand eel lures. Bachand’s lures are made in China out of a type of plastic and, he said, appeal to fishermen because of both their silver color and rattling sound that can attract fish.

Bachand said his preferred method of fishing is out of a kayak in Buzzards Bay. And with spring in the air, that image of authentic Cape Cod fishing was likely on the minds of many in the crowd at the annual fisherman’s yard sale.