The Ms Conducts get suited up before the game.

FALMOUTH – Heather Meehan greeted each player as they arrived in the locker room at Falmouth Ice Arena.

Soon everyone was smiling.

“This is the best part of our whole week. It’s a stress reliever,” Meehan, who lives in West Yarmouth, said.

What relieves the stress is the bumping, shooting, scoring and cheering, skating and sweating that add up to a night on the ice for the dozens of adult women age 18 to 67 who play competitive ice hockey on Cape Cod.

Four teams play in the Cape Cod Women’s Hockey League including the Ms. Conducts team that Meehan plays on. Stretching out before the game.

Known as “Mayor” (pronounced May-AH, an homage to her accent left over from her upbringing in Lynn), Meehan recently turned 45. “I am halfway to 90 according to my boyfriend,” she said.

But she looks ten years younger. On the ice, she’s a fierce skater, and one of the top scorers on her team.

As the women put down their massive bags of equipment and began suiting up for a game, there was a steady banter interrupted by a question.

“Who has Tums?” Meehan asked.

“Z-train” is Meehan’s nickname for Rachel Zaino, 46, of East Falmouth, who is known for her defense prowess. All smiles in the locker room before the game.

“She plows right through,” Meehan said.

Zaino, who has two children, started playing in the women’s ice hockey league ten years ago. A teacher of sixth graders at Morse Pond School in Falmouth, she learned how to skate as a kid but never played on a team.

Her son played hockey and she spent a lot of time driving him to the rink. “I always wanted to play,” she said. The Ms Conducts strike a pose before a recent game.

When she was first learning the game, there were some surprises. Like the fact that hockey skates are quite different from figure skates and so is the skating itself. “It’s more like skiing or rollerblading,” she said.

Practice times for the league can be as late as 10 p.m., but Zaino said that late hour has actually worked well for her over the years.

“For me as a working person, it’s really nice to go to work, take care of my family. After they had gone to bed and I’d go out and play hockey,” Zaino said, adding, “It’s all about the exercise.”

As more team members file into the locker room, Meehan has another request. “You got hand cream?”

Played With The Boys

Meehan started playing hockey age seven or eight. When she was in high school, there was no girls ice hockey program. “I played with the boys,” she said.

Years later, she had moved to Dennis on the Cape and she heard there was a women’s hockey league. She joined right up. But attendance was spotty. “Sometimes only five players would show up,” she said. She found out about the Cape Cod League based in Falmouth and she and others in the former league, like “Mum,” switched over. Mullaney, whose husband coaches Nauset Regional High School boys hockey, started playing in the women’s hockey league when she was 42.

The way it started was she was bringing her children to the rink and there was a group of moms who were organizing a team.

“I said I wasn’t interested. My husband said, ‘No, she is interested.’ But then I got hooked very fast,” she said.

Besides Molly, who plays on the team, among the younger players is Ally “Ninja” Murphy, 23, who arrived early to the locker room before a recent game. A 2009 graduate of Barnstable High School, Murphy’s quiet demeanor and petite frame belie her power on the ice. She played on the varsity squad at Barnstable High, and in her sophomore year, the team won the state championship.

“She’s so good—sneaking up behind,” Meehan said. 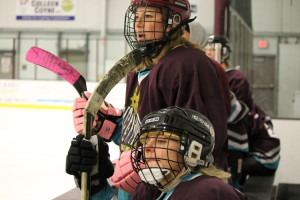 Keeping an eye on the action.

Murphy, like the others, spoke of the bonding element of the sport. “I like the camaraderie of being part of the team,” Murphy said.

Another younger player is Nicole “Euey” Eustice, 24, of Falmouth, a college student who works several jobs including at the rink’s snack bar.

In the locker room before a recent game, Eustice decided to get a rise out of Rachel Zaino by calling her “Mrs. Zaino,” the name students call her at the middle school where she teaches—and where Eustice went to school not too many years ago.

Zaino jumped up off the bench for a fake attack.

“I told all my students once they leave the school to call me Rachel,” Zaino said.

Another big scorer on the team this year is Meg Hebert, 36, of Wareham.

Hebert, who works as a recycling assistant for the city of New Bedford, grew up in Centerville and graduated from Barnstable High School in 1995.

In high school, Hebert didn’t play team sports, but six years ago a friend told her about the league and she decided to try it out. She laughs that when she started out she was the consummate beginner. “I didn’t know the rules,” she said. This season, with nine goals so far, she has been one of the higher scorers on the team, which she attributes to a change in position from right wing to left wing.

“Left wing seems to work better for me,” she said, admitting last season she had no goals.

She said she likes the camaraderie and the competition, as well as the athleticism and the excitement of the game.

The ladies donned their gear, which includes about 30 pounds of clothing and padding.

Meehan explained that the gear is often borrowed or hand-me-downs.

“A lot get leftovers from a cousin or a brother,” she said with a shrug. Kristen Williams, 43, of Westboro, said, “My son was a goalie. I use the stuff he wore in fourth or fifth grade.”

Supplementing the borrowed gear with purchased used sports equipment, “You can suit up for $150 to $200,” Meehan said.

Once suited up, the women head to the ice and they play to win.

There is no checking in women’s hockey, but there is plenty of contact.

Meehan explained how it is done. “I call it aggressive leaning. That usually works,” Meehan said.

All the women seem to enjoy the sheer physicality of the game, which keeps them in shape. Meehan said hockey keeps her healthy, which she said, is critical because she has multiple sclerosis.

“For me to stay busy and active is important,” she said.

Between games and practices, she skates several nights a week. She and some of the other players organized a second team, the Lurkin’ Merkins, to play in regional and even national women’s hockey tournaments.

The name, which refers to an obscene ornament for a part of the female anatomy, was coined late one night while the ladies were enjoying post-game drinks at Sam Diego’s restaurant in Hyannis.

One of the players, a doctor in radiology, came up with the name and another took the initiative that night to order T-shirts online. So by the next morning when clearer heads might have prevailed, there was no turning back on the name. The Ms Conducts wait their turn.

Besides playing in as many tournaments as they can, the Merkins host a weekend women’s hockey tournament, The Cape Cod Chowdah Classic, in June in Hyannis.

The season for the Cape Cod Women’s Hockey League lasts from October to March and there are 20 regular season games, on Saturday nights before playoff season begins later this month.

The problem with that, Meehan said. “It’s hard to find somewhere open to go out after the game. That’s the only reason we skate,” she said, with a smile. “It’s all about the beer.”

Meehan said the league welcomes all level of skaters, from those who skated varsity in high school like Murphy to those who can’t stand up on the ice. She explained that each team in the league has a fast and slow line of players so that the abilities of the players can vary widely but everyone can have fun. On the sidelines, ready to jump in.

The different lines and skill levels led to one joke in the locker room after the game when Meehan asked if anyone saw the goal she scored. The response, from Zaino, “No, we had our backs to you,” was her way of saying, the rest of the line was leaving the ice and Meehan was skating against the other team’s slow line.

Meehan took the ribbing in stride, happy to have scored one of the two goals that led to the Ms. Conducts’ winning score of 2 to 1.

“We usually don’t win,” Meehan said, noting the other team’s best player was out on an injury. But whether they win or not, she said, does not really affect the post-game attitude in the locker room. Heading home after the game.

It’s not so much about winning. “We celebrate because we got out of bed in the morning,” Meehan said.